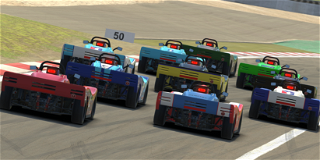 Over the last 12 weeks, we have been watching an intense battle on virtual race tracks around the world, as the first ever SCCA® Spec Racer Ford Challenge Presented by the Skip Barber Racing School ran its course on the popular iRacing.com online racing simulator.

Larry MacLeod took an early lead in the opening weeks, keeping it until Zachary Le Vey caught up. They traded the lead back and forth a few times until Le Vey began to pull away. Le Vey enjoyed his lead for several weeks through the mid-point of the season. But the race wasn’t over just yet. Tommy Bordeaux, who had been switching between second, third and fourth place, made a run for the top! In a matter of a few races, Bordeaux had upset the entire podium, working his way into first place. Now with Bordeaux leading, MacLeod was able to follow him and get back into second place.

The upsets continued to roll in, though, as Paul Darling began his own ascent in the standings. In the final three weeks, Darling was able to climb his way from deep in the top five to the top step of the podium. Darling managed to keep his lead through the remainder of the season to become the very first online SCCA Spec Racer Ford Challenge champion! For his win, Darling will be receiving a three-day entry to the Skip Barber Racing School!

Darling has been an active Sports Car Club of America® flag marshal for a number of years, and is glad to be able to jump into racing with some other SCCA members.

“Naturally, I am very excited to squeak out a close win in the championship,” Darling said after being informed of his winning effort. “It is great to see the SCCA jumping into sim racing esports with this series. I don't think it could have gotten much closer at the end there with the point differential between Tommy and I. I hope the series continues to grow with the SCCA's continued involvement.”

When asked what it was like to win an SCCA championship as a flag marshal, Darling had this to say: “Flaggers can drive well, too! Ha, ha. Honestly though, whether you're a flagger or a regular SCCA competitor, iRacing is another outlet for competition. I don't think winning this virtual series would feel different if I had years of track experience.”

With the first season closing out, we need to thank our awesome partners that made this whole thing possible. Skip Barber Racing School jumped on board quickly and was excited enough about the series to provide an entry to their school. iRacing was equally excited about SCCA venturing into virtual racing and helped tremendously with scoring and administrating the races, as well as having a great platform for drivers to race on.

Of course, a big thanks goes out to all the drivers in this first season as well. Without the weekly commitment of these SCCA members, the racing would not have been as good as it was to participate in or watch. Over 300 drivers registered to support the new series and we couldn’t be happier about the level of involvement. “The SCCA has been around for 75 years, but to continue relevance across the next 75, we must continue to grow and evolve. With this effort, we are excited to be actively participating in the digital future of Motorsports.” Said Michael Cobb, SCCA President / CEO.  “We are even more excited that our first winner also happens to be an active SCCA flag marshal. We can’t think of a better way to kick off our new series.”

With that, the second sim season starts up on Tuesday, June 11! Details still to come, but in the meantime get yourself signed up here, and be a part of the battle!

Races are scheduled about every two hours during the week. This is an official iRacing race, so races will be found under the Official Race Guide menu. We hope to see more of you jump in at the ground floor!